CAN an elephant talk to a crocodile? The answer is yes, as I discovered one day while sitting on the patio of our family ‘donor’ home in Kruger Park, South Africa. Previous to that day, I had spent many hours on that patio, under the shade of its huge spreading tree, reading books, watching the wide languid Sabie river flow past, and listening to the sounds of Africa. Crocodiles basked on the opposite shore and elephants and grunting hippos abounded.     Normally, I was out there with my step-son Henry who has since passed away. He and I would talk for hours about every subject under the sun. His curiosity was constant and so was his sense of humor. Invariably, as we sat together overlooking the slow moving Sabie, and I was engrossed in a book, he would break the silence by asking, “How much would I have to pay you to swim across that river?” It was a running joke between us. I would look up and scan the far bank, see a dozen large crocodiles laying like logs and say, “For a dollar I would throw you in the river,” and then the negotiations would begin. Eventually, the negotiations would reach $10 million dollars and the use of a marksman with a high-powered rifle and Henry would question my manhood. But I always wondered how deep the river was.

One day as I sat on the patio, I found my answer. An elephant came close to the house and began to walk ever so slowly across the seventy-five meter wide river. To my surprise, at its deepest point, the water didn’t even reach his stomach – at most it was about four feet deep. It turned out I wouldn’t have to swim at all! But as I watched, the biggest crocodile I had ever seen surfaced slowly into view and fell in behind the elephant. The croc was a good fifteen feet long and stayed about a body-length away, his speed matching that of his enormous target. What was the croc thinking? Surely he wasn’t stupid enough to attack the elephant! I watched.

Though he hadn’t turned his head, you could tell by the agitated flapping of his ears that the elephant was immediately aware of the crocodile. But the croc continued to follow. The elephant stopped. The crocodile stopped. The elephant continued. The croc followed. The elephant stopped again and let out a resounding angry trumpet. The croc stopped too but then continued when the elephant resumed his walk. After a few more steps the elephant turned and faced the crocodile. The big croc held his ground. For the next thirty seconds, the elephant proceeded to furiously beat and thrash the water in front of the crocodile with every ounce of his strength. His tusks, head, and trunk churned the water into a boiling white froth, the water leaping high into the air. I stood up and leaned over the wooden rail that separated me from the electric fence that lined our property on the river side, fascinated by this enormous display of power.

When the elephant was finished, he turned slowly away and continued his patient journey to the far bank. The crocodile, having gotten the message, peeled slowly off and eventually disappeared under the rippling water. Elephants can talk to crocodiles. In fact, they can be quite eloquent.

The pictures below were all taken from the patio of the house in Kruger. The second picture is of Kim, my wife, and my step son Henry. The third picture isn’t showing a log in the river, but a crocodile. Despite obvious similarites, hairy chest, prehensile tail, etc., the fourth picture is not of me scampering on the wood railing around the property.

Reminder: someday soon I will be moving this blog to my official website:  www.jimhaberkorn.com
Best regards,
Jim 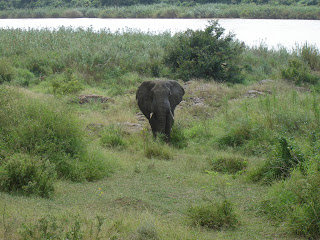 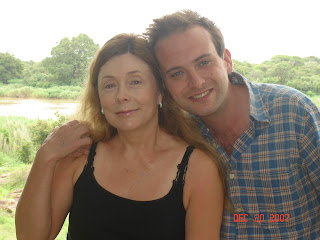 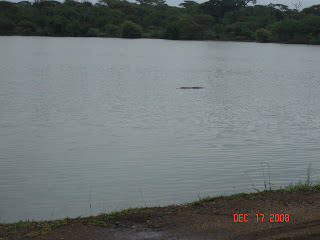 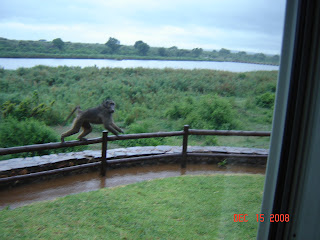